Editor's Note: An app user named Michael Salamey reached out to me a few months ago to let me know that he was using the app in an unexpected way. He wasn't tracking Bipolar, but rather general goals and habits, and it was helping improve his life and relationship. I was stunned and humbled that someone had found an unintended use for the app and how helpful it was proving to be.

I invited him to do a guest post on how the app was helping him as a general goal and habit tracker. Read on for more....


After my vasectomy, Nicole was excited to toss out her birth control pills. Freedom from chemical alteration of hormones and worrying about forgetting the Pill felt like a new horizon in our relationship. Except…

Except the unexpected aftermath of giving up mood controlling pills after more than 15 years of daily dosing was something we were unprepared for.

Our relationship is resilient—we traveled across the country together, dealt with health issues, career changes, family drama, living apart, living together, lifestyle changes, and we’ve always had each other’s back. Going off the Pill was different, though. It is like quitting an addiction cold turkey, yet the withdrawals last a really, really long time. In fact, almost two years later, we are still figuring it out.

For us, it is emotional Armageddon at times. Nicole’s cycle can be unpredictable. There are unexpected mood swings and our communication can really struggle. We know it’s not us. We know how it works but when we are in emotional turmoil, it is not like there is a sign over my head that blinks, “It’s okay—he really loves you and this is just hormonal imbalance—it will pass in a day or two and you will feel great again…”

I have my part in our emotional Armageddon, as well. My hormones and moods might not be chemically in flux, but I can’t help reacting to a moody (or mood-less) partner. Frankly, it sucks sometimes. There is no sign over Nicole’s head, either, blinking, “It’s okay—she is not really upset with you—this is just hormonal imbalance that will pass in a day or two and you will both feel great again…”

When we realized we had a problem, we knew we had to attack it together or our relationship would be in jeopardy. I began thinking our emotional blow-outs had a sort-of cycle to them, so I searched for any app or product that measured moods, periods, and things like moments of togetherness or feeling “connected”. I also wanted to track how often we were having sex (an obvious indicator of connectedness), as well as my weight and exercise habits to see if any of it correlated. Since I was not sure if it was Nicole or me prompting these cycles of miscommunication, I needed something that could track both moods and data points for each of us.

After trying several period, habit, and mood trackers, I found none of them could be customized to do what I wanted, most of them were geared toward young teen females, and nearly all of them came with zero or little data analytics to see how results stacked up over time.

After reading Jon’s very open and honest account of why he developed the app and how he uses it for himself, it seemed like it could work well for most everything I wanted, too. I tried it out and realized Jon may have unknowingly created the best habit tracker on the market.

I don’t usually contact developers, but the app was so close to perfect for me, I shot Jon an email…

"Your mood tracker is great for helping with psychological disorders, but you have perhaps…created one of the best and most robust goal and habit trackers out there. If you look at apps like HabitBull and Productive, eMood Tracker provides better data analysis!…It is a fantastic app for couples’ mood and habit tracking as well!”

Jon responded within a few hours, asking for detail on features I wanted to see and he continues to check in periodically to see how I like the app. Now, that’s a dedicated developer!

With eMoods, Nicole and I can identify trends in our communication patterns and learn to predict upcoming trouble spots. Because eMood Bipolar Mood Tracker lets me view the data in a myriad of ways (and better, allows me to export it), we can share the data with Nicole’s Endocrinologist, so the doctor can see the patterns we are seeing.

Not only that, but I use eMoods to track other behaviors like my weight, sleep, moods, and our intimate encounters to gain insight on myself. I know what days of the week I am more likely to feel romantic, for example (would you be shocked to know those days correlate negatively with stressful work days?). I now know I tend to lose traction on weight loss over weekends (too many fast food options when I am running errands!) and that in about three days from now Nicole is likely to feel depressed and irritable, and I should be prepared to give her space and not take anything personally! I also use the journal function on days when I want to note specific details about an event. 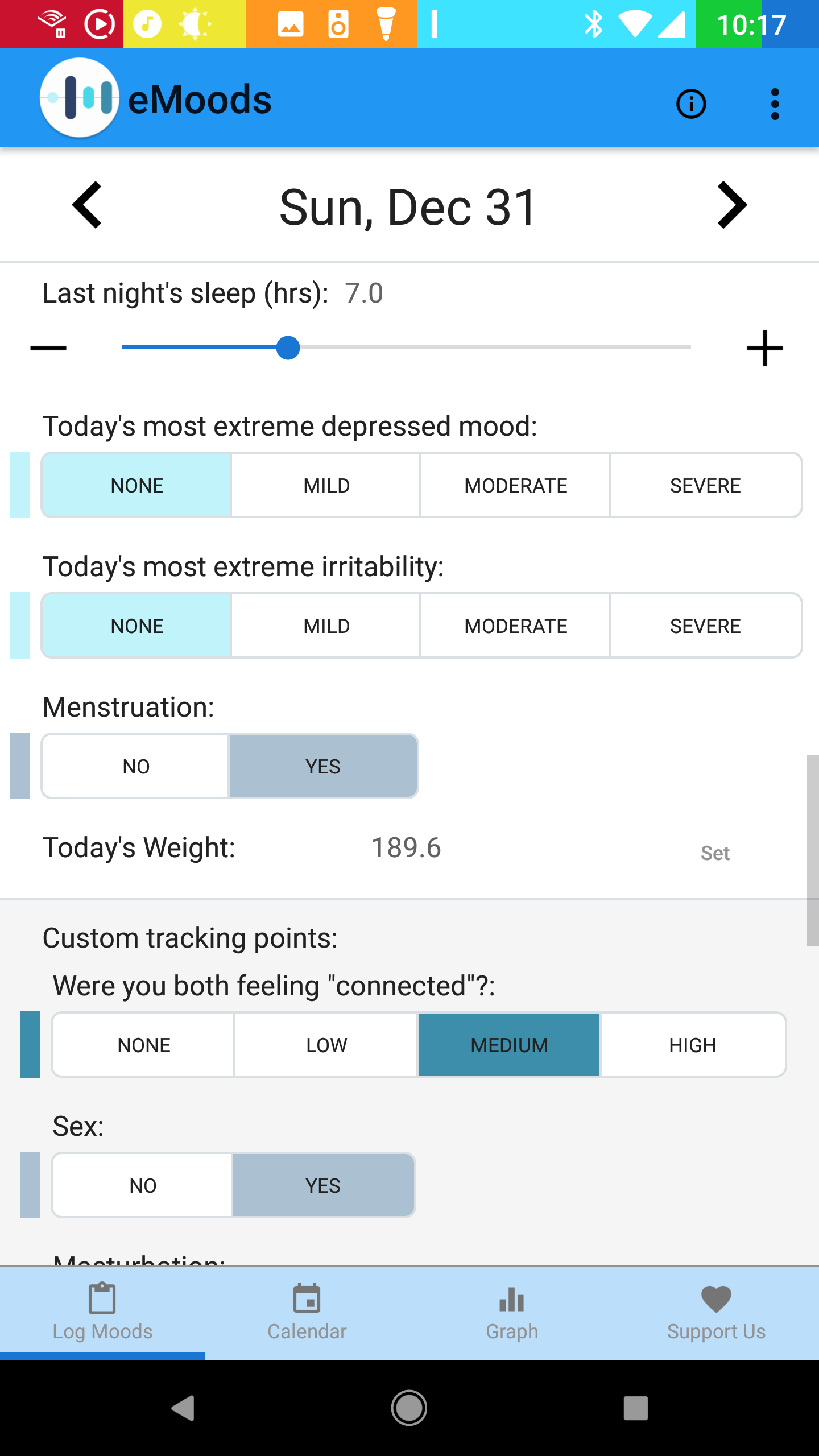 eMoods Bipolar Mood Tracker, I think, is one of the best apps around. It is one of the only apps I use daily and it is the app I gain the most value from. I can’t help but wonder where our relationship might have headed without a little technological help from an app like this and how many couples break up only because they do not have good data and can’t spot the cause-and-effect relationships in their moods and habits.

It turns out not all communication issues result from an inability to communicate well. Sometimes it’s not you or your partner. There might be something deeper going on, unnoticed.

No matter what data points you want to track for yourself or your relationship… if you want a customizable app that lets you analyze data such as yes/no questions (“Menstruating today?”), levels of agreement (“Were you both feeling connected?”), or numbers like weight or days since your last argument, then try eMoods and share it with friends.

One more thing… People expect apps for free, but paying for them is one of the best values for my money. For a couple bucks, I usually receive extra features, removal of ads, or the knowledge I am supporting future app development and cooler features.

This year, instead of giving money to big charities for a meager tax write-off, I am putting aside my “at the register or in the bucket” pocket change donations and re-directing them to support individual app developers, blogs, and podcasters I find value in want to see keep improving. There’s nothing wrong with giving to a charity of your choice, of course. For me, though, I want to see the people who work thanklessly and usually unknowingly to provide more value to my day know I appreciate and support them (especially since most of them blog, develop, or podcast in addition to working their actual jobs).

Subscribing to eMoods Bipolar Mood Tracker and reaching out to Jon was one of the best things I did for my relationship and I jumped at the opportunity to share a post explaining how I use eMoods in an unconventional way. I hope you do something awesome with it, too. 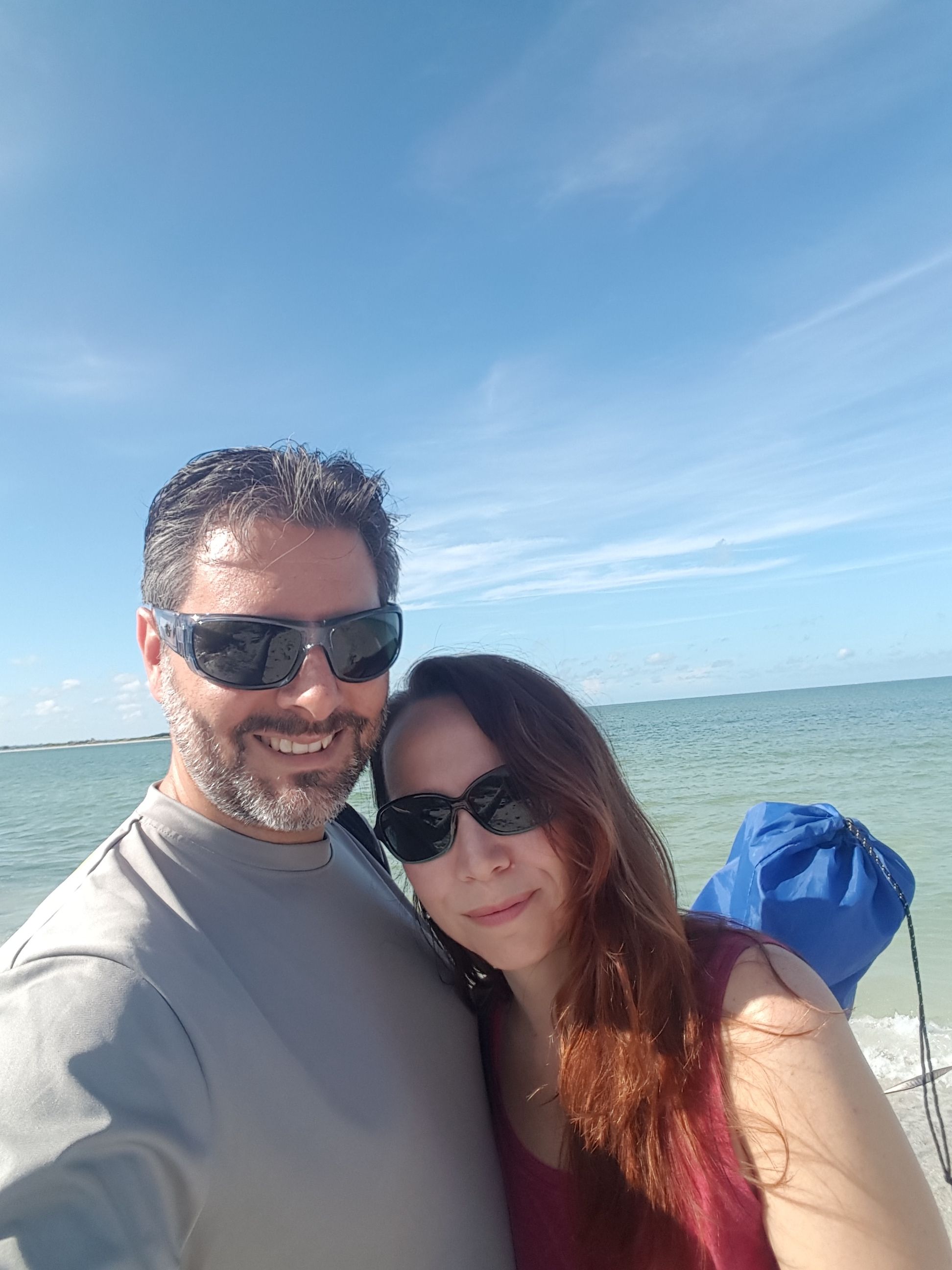 —Michael Salamey writes about Leadership on his blog, MichaelSalamey.com and writes with about his journey with Nicole as vegans living in Tampa on their blog, ACoupleVegans.com.

Be Kind to Your Future Self: Cut Out Minor Annoyance